In 2005, during the World Summit on the Information Society (WSIS), the Tunis Agenda 1 established the basis for the global Internet Governance Forum (IGF): “We ask the UN [United Nations] Secretary-General, in an open and inclusive process, to convene, by the second quarter of 2006, a meeting of the new forum for multi-stakeholder policy dialogue – called the Internet Governance Forum.”

The same document also laid the foundation for the creation of similar national and regional processes: “We encourage the development of multi-stakeholder processes at the national, regional and international levels to discuss and collaborate on the expansion and diffusion of the Internet as a means to support development efforts to achieve internationally agreed development goals and objectives, including the Millennium Development Goals.”

The first global IGF was formally announced by the UN Secretary-General in July 2006. That same year, some countries started organising initiatives at country level. 2

Since then, the global IGF has inspired the development of numerous IGF initiatives at country, subregional and regional levels, known as NRIs. As the events started to grow in numbers, the IGF Secretariat in collaboration with NRI organisers developed a Toolkit to assist communities in establishing the IGF initiatives. 3

The toolkit describes the basic requirements for an IGF initiative to be considered official and listed on the IGF website, including the fact that “NRIs should be multistakeholder, non-commercial, open and transparent”. It also offers suggestions about organising structures and processes. 4

This report allows us to visualise the growth of local and regional IGF events over the period 2011-2017. To compile the information we have used the official pages of the IGF Secretariat on the IGF website, 5 and have also consulted individual NRIs and their websites. We apologise if any information displayed is not accurate or complete. 6

Regional IGFs have become more stable and organised over time, with most regions having held IGFs for the whole period, as can be seen in Table 1. Meanwhile, as illustrated in Table 2, although only a few countries have organised an IGF every year since 2011, national IGFs continue to proliferate, with numbers growing steadily year after year. There seems to be a dramatic growth of local events this year, with national events taking place in 52 countries. 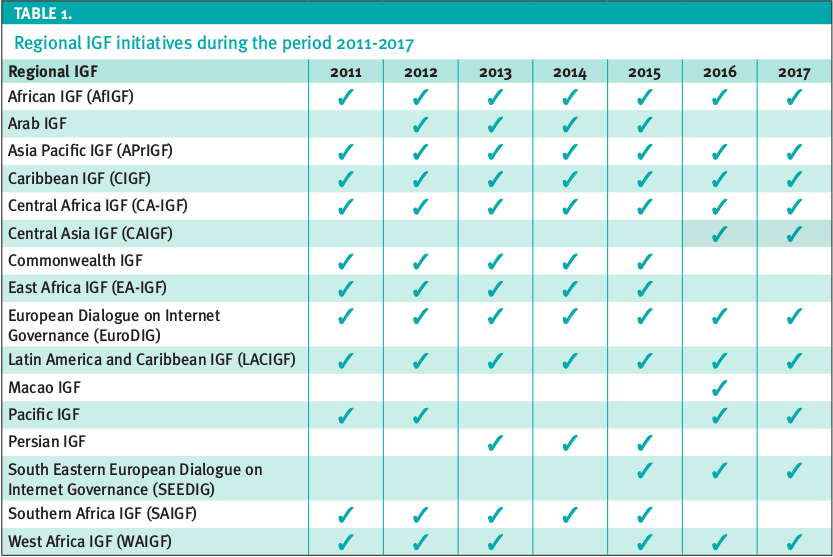 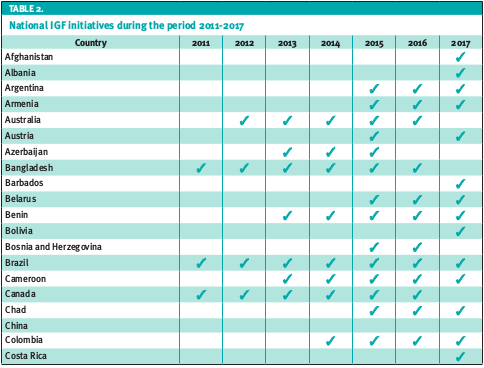 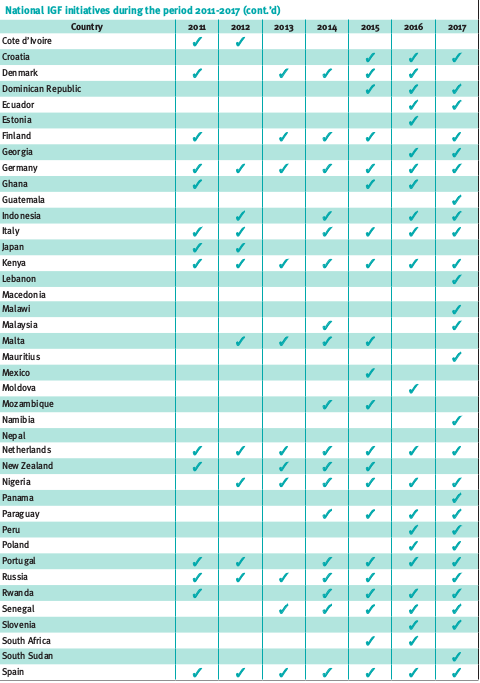 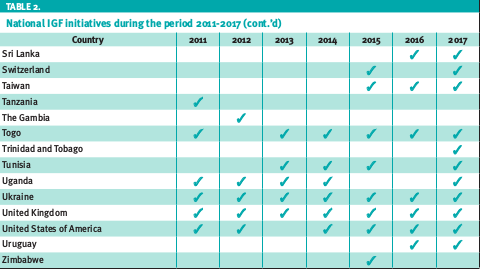