Many taboos and “red lines” are imposed on offline spaces like newspapers and TV channels in several states in North Africa, as well as many limits on freedom of expression and the right to assembly. It is not easy to establish a newspaper in Libya or a human rights organisation in Algeria or to call for a march in Bahrain.

Cyberspace is almost the only free space for many groups and individuals to practice not only their right to freedom of expression and speech but also to practice their right to assembly and to form associations and groups with common interests.

Human rights NGOs, bloggers and journalists played complementary roles at that time – and still do – confronting violations and providing immediate help to victims and those in need. Journalists used to share information and pass multimedia recordings of torture to bloggers so that they could post them online when their editors refused to publish details of the cases in newspapers. This fear was due to local laws or the response from security authorities or even that a publication would lose advertisements.

During the revolution, the Egyptian cyberspace erupted in extremely rich content, which took different forms – text, videos and pictures. Two main things affected the content in cyberspace: the first was what happened on the ground and the second was the accessibility of communications platforms.

From 14 January to 24 January 2011, netizens kept sending invitations to demonstrate on 25 January – National Police Day in Egypt – against corruption, unemployment and torture. In order to motivate participation, netizens posted human rights reports and statements on the status of human rights in the country online, as well as video clips of different torture cases, and pictures and footage from previous peaceful assemblies. Practical information was also provided, such as legal and medical tips for participants taking part in peaceful assemblies, tactics for using online platforms and mobile phones to organise, the locations and timings of demonstrations on 25 January, and hotline numbers for immediate legal and medical help from human rights NGOs.

Figure 1: Timeline of the communications shutdown in Egypt during the revolution 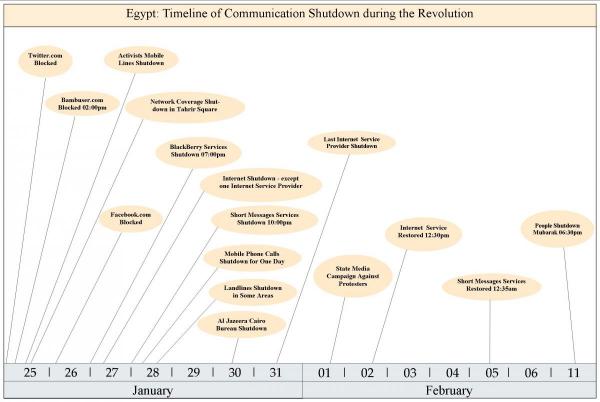 Before the internet was totally blocked, some activists were able to post information, videos and pictures from demonstrations and to cover what was happening offline. This was very important: besides offering concrete evidence to the world of the clampdown, it proved the government was just spreading rumours and false information of the security situation. There had been, until now, a big gap between what individuals posted and circulated online and what the state-run media broadcasted and published. At times this gap was extreme. For example, when netizens and activists posted pictures online of hundreds of thousands of demonstrators in Tahrir Square, the state media was showing a picture of an almost empty square which it called “live” footage!

Although some downplay the role that the internet played in the revolution, during the uprising online platforms were the only space where Egyptians could share what they really faced and went through.

Of course, many taboos are broken in offline spaces, but still – even now – online platforms are in some cases the only space where Egyptians can address topics that offline platforms cannot. These include human rights violations committed by military officers and other topics related to the army. These online spaces continue to put pressure on the authorities to address issues in the offline world.

During the revolution in Tunisia, the Tunisian cyberspace in general – and blogosphere in particular – was almost the only source of information, pictures and videos of what was happening on the ground. Offline platforms did not pick up on what happened in Tunisia in the beginning and even when coverage took place it was limited.

In Libya, Tunisia and Syria, where there is excessive control on offline media platforms, the internet was the place where individuals could share what was happening.

One of the first media tents set up in January in Tahrir Square was organised by a group of friends (including bloggers, human rights defenders, political activists) using their personal laptops, cameras, memory sticks, hard disks, cables and other devices that might be needed. We also put up a sign3 that said "Point to upload pictures and videos". The main thing we did was gather all kinds of multimedia from demonstrators in Tahrir Square, then made the content available online.

For me, doing this was very important because I believed that making those pictures and videos public would help everyone to really understand what was happening on the ground. It would allow them to follow the situation and be able to assess it, as well as have an overview of what happened in different cities in Egypt, given that those people who had pictures or videos were not only from Cairo.

Providing the content also helped to prove that the government at that time was just spreading lies and rumours and manufacturing fake images of the protests. The content that we uploaded proved that violations were taking place, whether a video showing police shooting at peaceful demonstrators, or a picture showing a sniper pointing his gun at someone.

There are several challenges facing online communities and activists. These frequently relate to the violation of an individual’s privacy and legal threats that any netizen could face based on their online activity.

These threats have become more intense due to international companies providing technical surveillance and monitoring systems to governments around the world. These companies simply develop programmes that enable governments and security agencies in the ruling regimes to violate anyone’s privacy, monitor anyone’s activity and impose censorship. Consequently, they are helping governments to fabricate cases against political activists and human rights defenders on charges like “destabilising order”, “defaming state leaders”, “spreading rumours to overthrow the regime” and many other charges that regimes set to minimise the work of civil societies and activists towards securing human rights.

For example, in 2009 – and maybe even earlier – a European-based company with its headquarters in the United Kingdom called Gamma Group International offered the State Security Intelligence (SSI) in Egypt security software. SSI units describe this software in their internal communications in August 2009 as a “high-level security system that has capabilities not provided in other systems. Its most prominent capabilities include hacking into personal Skype accounts, hacking email accounts associated with Hotmail, Yahoo and Gmail, and allowing the complete control of targeted computers.” In December 2010 the SSI reported that the software can “record audio and video chats, record activity taking place around hacked computers with cameras and make copies of their content.”

This is just what we knew after Egyptians stormed SSI headquarters, discovering the documentation.

Even without the use of such programmes, netizens might face trial due to content posted online. This happened to human rights activist Nabeel Rajab, director of the Bahrain Center for Human Rights. Rajab was criminally charged in April 2011 for publishing images on his personal account on Twitter.

The Dubai School of Government issued a report in May 2011 on social media in the Arab region; the statistics on Twitter and Facebook usage in North Africa are presented in Table 1.

Each space used to share information and knowledge has its own key players, target groups, and positive and negative points. There are differences, not gaps, between the press and radio stations. There are also differences between online and offline tools and communities, and these differences are normal – the “gap” should not be the main concern.

Individuals and groups use online tools to complement their offline work in mobilising people for events, and online tools are used to provide coverage of and document what is happening offline. The relationship between both online and offline communities can be complementary.

“Crossposting” is the main way that online communities help spread information and create a wave or buzz on particular incidents. Bloggers from Syria, Bahrain, Morocco and other states played an important role by crossposting the content coming out of Tunisia and Egypt. This pushed offline media to use online content in their work, enabling more people to become aware of what was happening and helping the content reach more and more communities.

The internet is a free space that enables individuals and groups to practice their rights in a different way when they have no space offline. Online tools help social movements to better communicate, share their ideas and achieve impact and improvements. Building movements and improving human rights and political situations can only be done offline with the mobilisation of people, using all available tools, including the internet.

I joined the street demonstrations in Egypt on 28 January. Before that, together with my colleagues, I was providing legal and medical assistance as well as documenting violations. In the beginning, for me, the day was just another demonstration that might continue for several days and end up in a brutal clampdown by the police. On 2 February I realised it was a revolution, and people would not leave the streets until Mubarak was brought down.

During the revolutionary events, and on a daily basis, it was clear that we went through a wide range of feelings. You get angry, upset, aggressive, afraid, feel courage and fear and suddenly happiness and hope.

The most important thing that made me feel comfortable and believe that anything is possible was that I was not alone in the streets. Many people were around helping, showing support and solidarity. This would not be possible on the internet alone.